OVO is a headlong rush into a colourful ecosystem teeming with life, where insects work, eat, crawl, flutter, play, fight and look for love in a non-stop riot of energy and movement. The insects' home is a world of biodiversity and beauty filled with noisy action and moments of quiet emotion.

When a mysterious egg appears in their midst, the insects are awestruck and intensely curious about this iconic object that represents the enigma and cycles of their lives.

It's love at first sight when a gawky, quirky insect arrives in this bustling community and a fabulous ladybug catches his eye - and the feeling is mutual.

OVO is overflowing with contrasts. The hidden, secret world at our feet is revealed as tender and torrid, noisy and quiet, peaceful and chaotic. And as the sun rises on a bright new day the vibrant cycle of insect life begins anew.

The name OVO means “egg” in Portuguese. This timeless symbol of the life cycle and birth of numerous insects represents the underlying thread of the show. Graphically, OVO hides an insect in its name: The two “Os” represent the eyes while the letter “V” forms the nose. 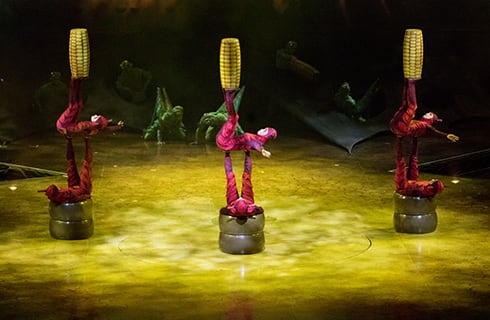 The hardest working insects in the community are the bright red Ants. As soon as they’re awake they spend their day gathering food: On the menu today—kiwis and corn. But it’s not all work. They play with their food, too—with their feet—in an astonishing display of precision juggling that climaxes with ants juggling ants.

Combining agility and grace this soon to be Butterfly performs a solo contortion on aerial silk showcasing her theatrical metamorphosis. 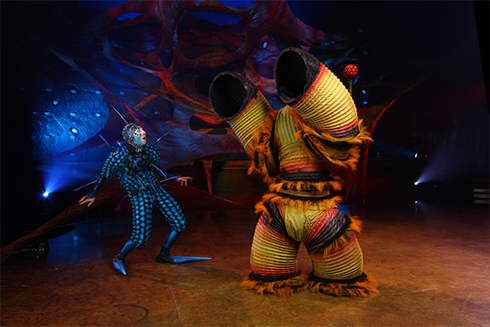 Part Slinky, part insect, the Creatura dances to a tune that is all his own. He’s a bendy, twisty knot of stretchy limbs in constant motion. 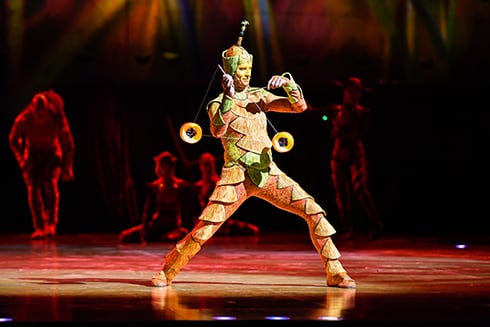 In a mix of high-speed diabolo and seemingly impossible juggling a firefly sends one, two, three and finally an astonishing four spinning spools arcing very high in the air and back to earth in perfect coordination.

A Dragonfly performs a graceful balancing act in and out of the slender stalks and twisting tendrils of an elegant plant. It takes extraordinary control and strength to transfer his weight from one hand to the other as he maintains equilibrium upside down on top of the foliage.

Merging hand-to-hand, ballet and aerial contortion in an impressive flying act, this pair of Butterflies performs a pas-de-deux on aerial straps that allows them to swoop and land, leap and fly in perfect unison. 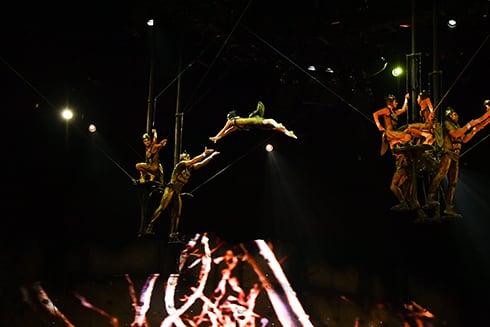 In a stunning aerial act, a group of scarabs soar high above the stage, from both edges to the middle. A distance of 6 meters separates the catchers!

In a tour-de-force performance a Spider defies gravity and physics in a succession of seemingly impossible feats of strength and balance as he traverses a wire that ppears to give him no support. At one point he hangs at a 45-degree angle over the ground, some 15 feet below, and he tops that with an upsidedown unicycle act. And the wire is in almostconstant motion up and down, adding to the degree of difficulty. 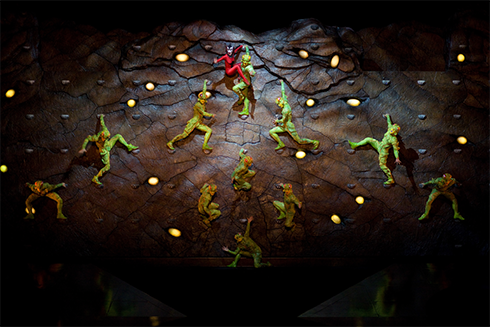 This act features a dozen artists running, jumping, and walking across—and straight up—a vertical wall without artificial support. Air mat and trampolines give them the speed, lift and momentum to take flight. Their athletic ability, physical strength and team coordination take care of the rest.

One of the funny spiders reveals her sensual side when she attracts the attention of a group of Crickets by weaving her body over, under and through the strands of her web. She’s soon joined by another bright, dazzling spider contortionist who casts a sensual spell of her own.

The Ladybug is big and strong (but doesn’t realize it) and full of life. Unlike all the other insects in the community she is not part of a family. She’s all alone and lonely, and she’s secretly waiting for something wonderful to happen in her life—something like love. When The Foreigner arrives carrying a strange egg she’s excited by the possibility that her life – and everyone else’s – could be about to change.

The Foreigner is a fly in constant buzzing motion, a live wire, an attention seeker, full of bravado and misplaced confidence—and sometimes just plain crazy. The sexy spider doesn’t stand a chance of winning his heart when he sees The Ladybug for the first time. He’s instantly smitten!

Master Flipo is the chief of the insect community, maybe because he’s the oldest. He’s smart and wise – but eccentric too, and he’s very silly sometimes. The whole community respects and likes him even though they know he can be a bit dim-witted.

Complicity with the world of insects

Liz Vandal, the costume designer for OVO has a special affinity for the world of the insects. “I’ve always had passion for them,” she says. “When I was just a kid I put rocks down around the yard near the fruit trees and I lifted them regularly to watch the insects who had taken up residence underneath them. I petted caterpillars and let butterflies into the house. So when I learned that OVO was inspired by insects, I immediately knew that I was in a perfect position to pay tribute to this majestic world with my costumes.”

Liz has a signature style inspired by futuristic superheroes and by suits of armour from all eras. These two sources inform her designs for the OVO costumes. Flattering lines and an elongated, corseted look are a nod to the world of super heroes while the segmented shells on many of the garments alternate between hard and soft, much like the armour and the bodies of knights in the Renaissance.

Evocation rather than imitation

Liz’s first challenge was to imagine a way to evoke insect without copying their actual anatomy. “The solution was to connect with the feeling of being face to face with a spider, a cockroach or a butterfly,” she explains. “Then I made detailed drawings of designs that interpreted their morphology. For example, the dragonfly’s wings are evoked by pants made of veined lace, and the mosquito’s stinger by a ‘Mohawk’ of fine red stems. The idea of the shell also became a metaphor, since the word ‘insect’ refers to ‘sections’. This revelation consolidated my approach.”

Liz drew on the wealth of experience and know-how of Cirque’s costume shop to put it all together. “Together we developed techniques of pleating fabrics to provide three-dimensional muscle, volumes and shells,” she says. “The result is a sort of organic origami. The most obvious example of that is the crickets’ costumes. The team also explored the textures of wings and shells using the sublimation technique to poeticize them and give them an evocative texture.”

In a play of colors and patterns, Liz implemented variations on a theme by incorporating thin lines on the ants and crickets, and pleated abstract transparent outfits for the dragonflies. She also used materials to suggest insects’ shells, and lacy fabrics for the wings and soft sections of their bodies. To enable certain characters such as the mosquito to move, she placed sections of shell within other sections, which open and close to reveal the soft body inside.

Crickets – symbols of the colony

Ten crickets are the key insects in the show. At times, they have detachable legs that break away from their bodies, which the impression that there is an insect invasion going on. “I have a particular soft spot for these characters,” she says, “because their costumes are so sexy, graphic and vibrant.”

The Foreigner is a character who lands in the middle of OVO. He is a fly in vintage suit who only reveals his true nature when he falls for The Ladybug. After his transformation, he wears a costume of bristling spines. His lanky, angular form contrasts with the roundness of The Ladybug.

Liz Vandal took her inspiration from many sources, including certain fashion designers such as Pierre Cardin, who focused on graphic lines and geometric shapes. She was also inspired by the slashed sleeves of Renaissance garments.

Liz and her team in the costume shop have exploited the permanent pleating technique developed by Japanese designer Issey Miyake, which gives a certain rigidity to material and creates an organic effect. “We pushed this technique even further,” she says, “by printing on colored materials, sublimation and eroding the fabric not only to stiffen it, but also to give it a metallic sheen.”

Designer Gringo Cardia drew inspiration from the structures that certain species of insect create when they establish nests and colonies.

Gringo has worked closely on many dance productions with OVO’s director Deborah Colker and they are used to a cross-pollination of ideas. He has contributed content to the show and she has brought ideas to the set design—neither approaches their role in isolation.

The overall setting of OVO is a stylized habitat that is home to the insects. At times it is a forest, at other times, a cave—or it could even be a house. Gringo’s objective was to create an organic environment that could lead to many other places.

The set elements: giant objects in a minuscule world

The show starts with a gigantic Egg on stage, obscuring much of the performance space from view. The mysterious object from the outside world is an inexplicable enigma in the eyes of the insects (and a nod to the monolith from the Kubrick film 2001). This timeless symbol of fertility and regeneration reappears in other forms later in the show, laid by the insects.

The largest set element is the Wall, which is set against the rear of the stage. The performers climb on it, disappear into it and use it as a stage, a platform and a launching pad.

At first, the Wall is concealed by two enormous “Skins” designed to create a sense of depth, and, through holes and openings, to reveal its secret life as a home to the insects as each of the Skins are removed in turn.

There are almost no straight lines to be found anywhere in the set. True to the organic inspiration of the show, the Wall is curved, and so is the stage. But there is one exception: the Spider’s Web. Real spiders’ webs are made up of straight lines, so this is a case where art imitates life with a nod towards geometry. It is made of strong woven synthetic straps.

An enormous 30-ft mechanical Flower appears on stage. The Flower blooms and becomes much more than an over scale prop, it’s a character in the show. Part sculpture, part puppet, part robot, it is seen from the insects’ point of view as a towering, inspiring feature of their environment.

To create the musical score for OVO, Berna Ceppas combined the sounds of bossa nova and samba with funk and electro music. And, as you might expect from a Brazilian – there is a lot of percussion in the score.

Berna Ceppas sampled actual insect sounds to combine with the music directly from the keyboard. He also assigned instruments and individual themes to specific characters.

In almost all of Cirque du Soleil shows, the music is performed live. And, unlike musicals, the music needs to adapt to what is going on stage and not the other way around. To do so, the band leader, the musicians, the singers and the sound staff are in constant communication via headsets and microphones. 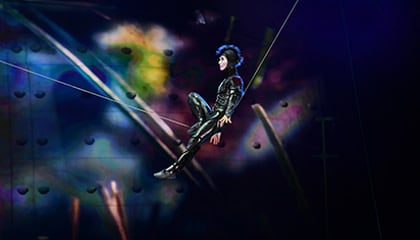 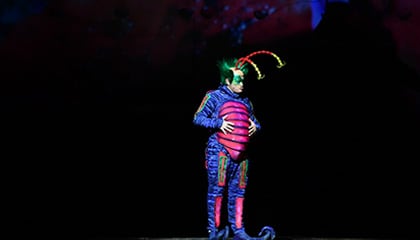 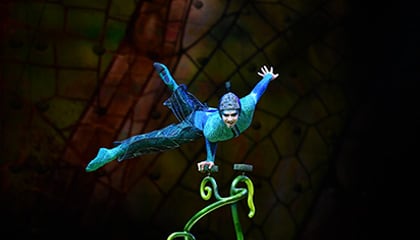 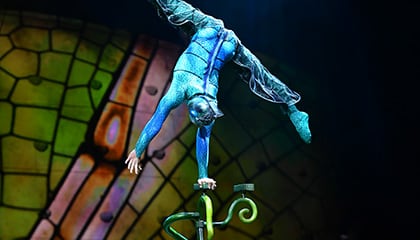 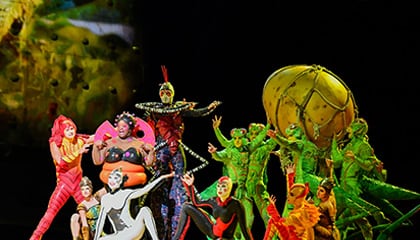 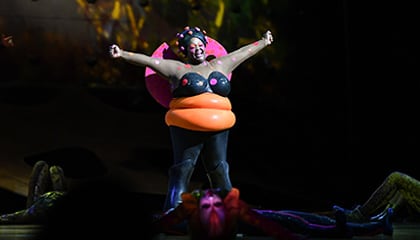 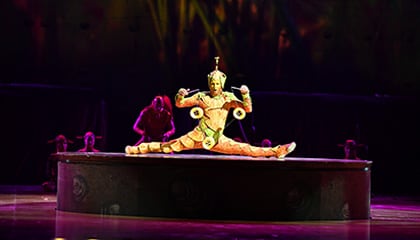 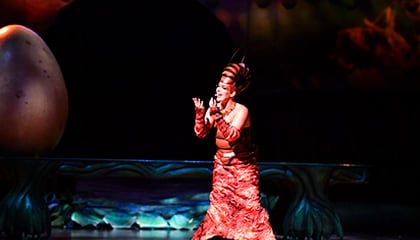 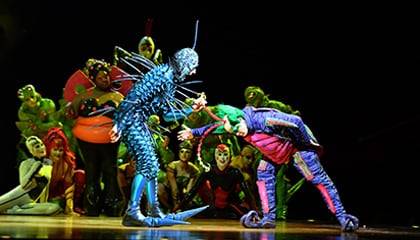 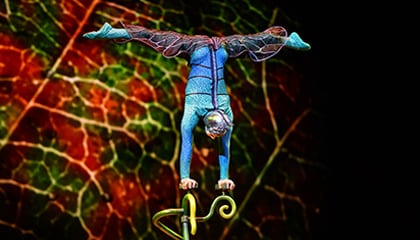